Building Blocks of a Democratic and Functional State 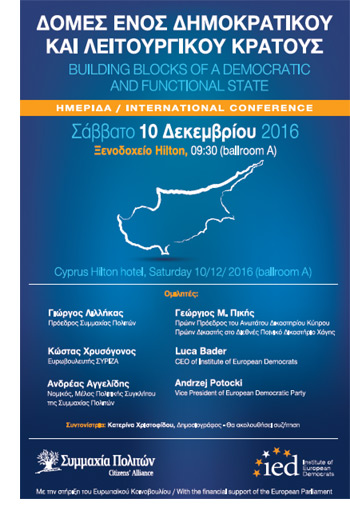 On Friday 10 December 2016, symbolically on the International Human Rights Day, in Nicosia, Cyprus, the IED in cooperation with the Citizensʼ Alliance of Cyprus organized the conference titled "Building Blocks of a Democratic and Functional State". The speakers discussed inter alia the current situation of compliance with human rights and democratic freedoms in the Republic of Cyprus and asserted that these principles which constitute core values for the EU, should be incorporated in an unambiguous, unequivocal, clearly prescribed and binding manner in any proposed solution which will aim to resolve the ongoing Cyprus problem – a problem of invasion, ongoing occupation, mass population transfer, illegal settlement, continuous human rights violations by Turkey since 1974, a problem affecting the division and continuing occupation of the territory of a member state of the EU, affecting its effective control and exercise of sovereign rights and powers throughout the whole of its territory.

The speakers attempted to set out the minimum parameters and framework which any acceptable solution should include. They highlighted the requirements and need for certainty, the incorporation of procedural safeguards and adoption of characteristics necessary so as to achieve a functioning, democratic state within the EU. It was argued that the solution so as to ensure it would not collapse, should be fair, effective, workable and functional on an executive, legislative and judicial level, while simultaneously it would reaffirm and protect the rights for each citizen, without any form of discrimination which would be based upon the ethnic origin of each person. This equality and non-discrimination principle would thus guarantee the stability, fairness and workability of the solution. Moreover, it was supported that the solution as a condition sine qua non must adhere and be compatible without derogations, with the acquis, rule of law and the protection of human rights. The people of Cyprus should enjoy the same rights as any other European citizen without any exceptions and they should not be rendered 2nd category EU citizens within the EU.

The conference was opened by the President of Citizensʼ Alliance Yiorgos Lillikas, Former Foreign Minister and currently MP, who expressed his belief that the state has to be governed by the principles of democracy and human rights as this constitutes a precondition to establish workable, effective, fair and based on the rule of law and good governance state, equally attractive and beneficial for all its citizens without any discrimination. In his view, functionality, democracy and equality will strengthen the trust of citizens in the state and its bodies and he stressed that only a functional state may be viable option which will truly provide stability and prosperity to all its citizens be they of Greek Cypriot or Turkish Cypriot origin. He also expressed the point of view that the geopolitical developments in the broader area, the finding of great quantities of natural gas in the EEZ of the Republic of Cyprus are all parameters which should also taken into consideration so as to create a conversion of interests with other countries.

The Member of the European Parliament and Professor of Constitutional Law Kostas Chrysogonos highlighted that the law of the EU and international law continues to be systematically violated and breached due to the illegal occupation of the northern part of Cyprus. According to the Professor, the evolution of the Republic of Cyprus for all Cypriots needs to take place under the direction of the representatives of both communities; a constitutional debate should be initiated and should define in a clear and unambiguous manner the legal process to be followed. He suggested that the details and parameters of the solution should be clearly defined within the spectrum of legality, international law, human rights and EU core values and principles.

Andreas Angelides, Constitutional and Human Rights Lawyer and former Speaker in Parliament, emphasized that the lack of the rule of law in any potential settlement will lead to corruption, constant friction between the two communities, distrust, violation of human rights and illegal actions and thus proposed that any solution should unite the people of Cyprus rather than distinguishing, dividing and discriminating them and attributing rights and obligations according to their ethnic background. He suggested that this notion of ethnic segregation is anachronistic and in violation of the principles of democracy and non discrimination and to this extend mentioned the very recent case of the ECtHR Pilav v. Bosnia Herzegovina application 41939/07 issued September 2016. Moreover he asserted that Cypriots have been deprived in an ongoing and collective manner their basic, fundamental rights since the commencement of the occupation because the occupied by Turkey territories of the Republic of Cyprus do not apply the rule of law and the Acquis. People of Cyprus, both Greek and Turkish Cypriots should be allowed to determine and decide their own future freely without the interference of Turkey in a way that will negate any and all form of discrimination and will restore democracy and human rights and will allow refugees to return to their homes and property.

A very prominent public figure, former Judge of the International Criminal Court in Hague and Former President of the Supreme Court of Cyprus, George M. Pikis concentrated on the contemporary history of Cyprus from the legal point of view. He argued that over centuries, due to its geopolitical position, Cyprus has been conquered and the rights of the people of Cyprus have been violated, whether it was under the Arab, Venetian, Turkish or British rule. In his opinion, the Turkish invasion, occupation and illegal settlement of the north part of Cyprus has resulted in crimes against humanity, war crimes, missing persons, rapes, indiscriminate killings, pillaging and has rendered hundreds of thousands of Cypriots refugees in violation of international humanitarian law and international law. Mr Pikis insisted that justice must and should prevail and that any solution which will not be just will not survive in time because anything that is unjust is unfair and thus unworkable and unviable. According to François Pauli, the Member of the Board of Directors of IED, the ongoing situation in Cyprus is not acceptable any longer and the independence of entire Cyprus must be guaranteed by the EU and the international community. Andrzej Potocki, the Vice-President of PDE-EDP and Stronnictwo Demokratyczne, highlighted that the Turkish President Erdogan will continue strengthening his authoritative rule in Turkey which can subsequently lead to the increase of a number of Turkish troops in the Northern part of Cyprus and may lead to the declaration of some form of Turkish protectorate and annexation with Turkey. "As a result, we need to act and manage the settlement of Cyprus now," Mr Potocki concluded. The event was moderated by a Cypriot journalist Katerina Christofides. The conference was attended by numerous Ambassadors, NGOs, academics, judges, members of the public and several TV and radio stations and newspapers.