Romania's stance in the issue of the Refugees crisis

The present paper is a part of a broader European debate concerning the rise and risks of the refugees crisis in the midst of a European Union tormented by an economic, social and security crisis. Using open sources I present here a brief overview of the Romanian political landscape and the scars that the debate regarding the refugee crisis left, using open sources.
At the EU level we are currently dealing not only with a massive influx of refugees from war torn countries such as Syria and Iraq but also with an increasing number of economic migrants that tend to be mixed together by an overly passionate public opinion and political class. It is important in my opinion to have this distinct approach in order to try identifying the necessary policies.

For the first time after the end of a Second World War, we are assisting to a huge migratory flux in Europe, with persons coming from foreign cultural areas that have triggered a wave of fears and potential conflicts due to difficulties of cultural integration, all on the background of older migrant issues in Western Europe.

Taking into account the fact that migration issues seem to be yet ever more present in contemporary European democracies, this phenomenon is likely to draw further scientific attention, and an increased need for nationally localized studies, such this one on Romania. 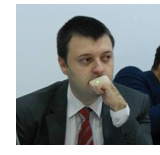 Mihai Sebe is currently an expert in Romanian and European Politics within several public and private organizations and YDE member, providing an in-depth assistance on the way how the Romanian contemporary politics is built and functions from the perspective of past Romanian political experiences and of the current European and global context that shapes nowadays. With a Bachelor’s Degree in Political Sciences in French Language and in Law he has obtained a PhD in Political Sciences at the University of Bucharest. His main areas of interest are political sciences, international relations, contemporary history of Europe and Romania, the history of the European idea as well as public law and the area of ethics, corporate social responsibility and intelligence, especially legal intelligence.

Romania’s Stance in the Issue of the Refugees Crisis. Preliminary Observations (Dec 2015)