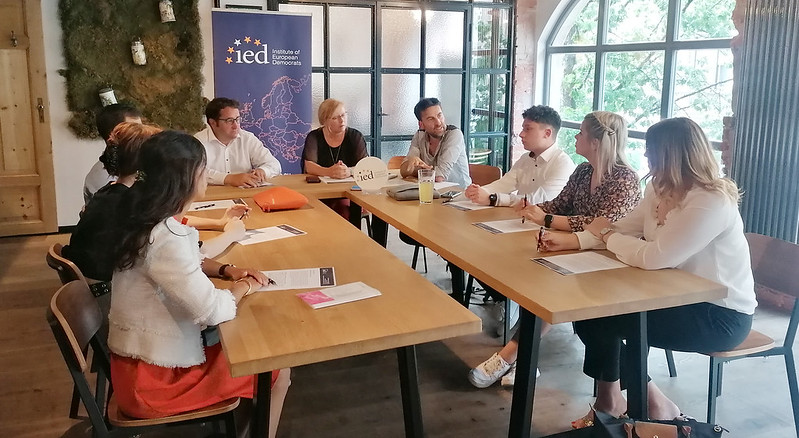 On the afternoon of Monday 27 June, the IED organised the second chapter of its yearlong project EU Youth Dialogues, in Nurnberg, in the south of Germany.

This project aims at drawing a partial yet living picture of the current situation of the European youth and younger generations. Based on a conversation between those who have chosen for themselves a path to political commitment, and those who preferred to stay away from politics, the Dialogues invite all participants to share their motives, explore their goals and renew their purposes.

With the precious help on the ground of Kerstin Dowdell and the patronage of IED Vice-President Gabi Schmidt, and Tobias Gotthardt (MdL), 6 young professionals and university students gathered for a friendly conversation on democracy, politics, ecology, solidarities and the contemporary challenges for Germany and Europe.

From the exchanges some very interesting and important points emerged. First the overarching dominance of a sentiment of anxiety towards the future, in particular eco-anxiety. With nuances of course, varying with their personal situations and also political inclinations, it appeared that the current climate and ecological crisis would affect this group of young people quite deeply. Of course, they did acknowledge that this awareness might also stem from a more of privileged level of education and cultural environment, which constitutes the second important point their conversation underpinned: the importance of education, at all ages of life. “Our studies did not prepare us to this reality”, they regret. The collective awareness and reform of the system appears to be a priority.

And in this regard, the issue of radical actions and speech, as well as the respect for the words coming from the younger generation was another major issue of discussion. While some would deplore a lack of understanding from the older generations, which could justify a louder voice in the debate, those more involved in the public debate and action already would rather insist on the necessity for a more balanced yet equal dialogue. The gradual disappearance of the middle ground and the nuance from the public sphere is a source of concern. The acknowledgement that everything is political, while it shouldn’t be necessarily partisan emerged as a shared opinion.

Finally, Europe was a constant horizon called upon. Whether it is the open-ended promise of opportunities that they enjoyed, or that everyone should be able to enjoy, or simply the other relevant level of action for real change, with local government of course, Europe is a defining part of their identity.

The next edition will take place in France, after the summer break.