Watch our short video documentary about the event on YouTube!

Institute of European Democrats and Young Democrats for Europe organised the 2nd edition of the Winter Academy which took place on 24 and 25 of November 2017 in the Thon Hotel EU in Brussels, Belgium. The Winter Academy dealt with the subject Youth Engagement in Building a more efficient Europe.

On Friday, the Academy welcomed a distinguished keynote speaker, Vice-Chair of the Greek Parliament and Vice-President of the European Democratic Party (PDE-EDP) Marios GEORGIADIS, who talked about the voice of European youth in democratic life of Europe.

On Saturday, young delegates discussed the most important current issues that resonate across Europe in the workshop "For a Europe of United Diversity" which was composed of five groups:

The presentation of the conclusions from this interesting workshop was followed by the roundtable "Where will we be in 2027?" in which young delegates discussed how Europe and the world will look like in ten years time.

The event was organised with the financial support of the European Parliament. 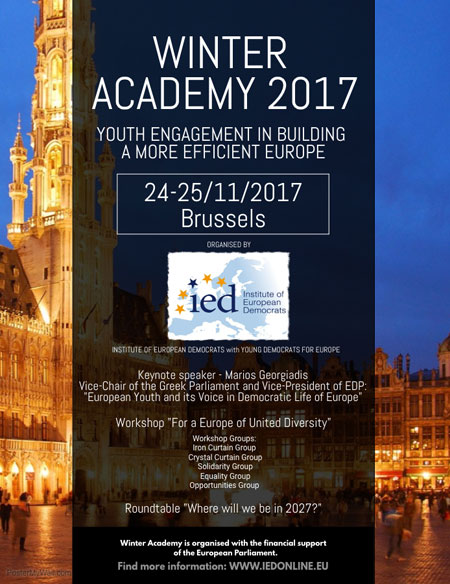 Pdf document: Workshop - For a Europe of United Diversity (EN)