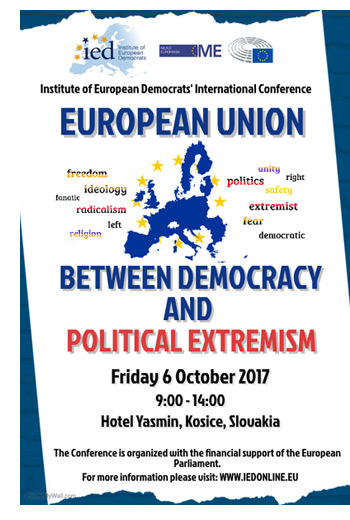 In recent years, we have witnessed the rise of popular support for right-wing and extremist parties and movements across entire European Union. A record number of these parties have entered European, national and regional parliaments, most recently this was the case of the Alternative for Germany (AfD) which has become the first far-right nationalist party to enter the German parliament since the Second World War. More and more voters feel frustrated from the current state of affairs and, as a result, they vote for what they consider as "alternative". Sadly, extremist parties find support even in economically secure regions and among highly educated citizens or young people. Extremist parties abuse the fears of people and combine Eurosceptic, anti-migrant and racist positions with populist rhetoric and unrealistic promises. In this way, the rise of political radicalism represents one of the most acute challenges to European democratic systems, liberal freedoms, human rights, rule of law and existing political institutions; however, the appeal of these political entities and the profile of their supporters remain very poorly understood.

Reflecting this dangerous trend, the Institute of European Democrats organized the International Conference titled "European Union between Democracy and Political Extremism". The conference took place on 6 October 2017 in the congress hall of Yasmin Hotel in Košice, Slovakia.

The aim of the event was to analyse the reasons for the current successes of radical politicians, explain who is responsible for this trend, why extremists are dangerous for the society and how the rise of political extremism can be viewed in the European context. Last but not least, the speakers of the conference formulated possible suggestions how to warn about the dangers of such politicians and eliminate the rise of political extremism across EU Member States.