Women's Spring Event: How long do we still have to go? How can we stop violence on women?

The Insitute of European Democrats together with Citizens' Alliance organzed organized the international conference titled "Women's Spring Event: How long do we still have to go? How can we stop violence on women?". The event took place on Saturday 13th May 2017 in Nicosia, Cyprus.

The aim of the conference was to discuss one of the most serious and alarming violation of human rights in global society - violence against women and girls. Violence against women and girls involves crimes such as sexual assaults, physical and psychological abuse, rape, forced marriage, female circumcision, forced sterilization and any other act of gender-based violence that results in physical, sexual or mental harm or suffering to women. Global estimates published by the World Health Organization show that about 1 in 3 (35%) women worldwide have experienced either physical and/or sexual intimate partner violence or non-partner sexual violence in their lifetime; however, this number can be much higher considering the fact that many women and girls are afraid to report these crimes and the society still lacks effective mechanisms to combat violence against women. And this is not only the case of developing countries of the world but also the case of the most developed regions, including the EU. A survey by the European Union Agency for Fundamental Rights found out that up to 33% of women in the EU aged 15+ have already experienced physical or sexual violence – this represents about 62 million female citizens of the EU. Another shocking fact is that 67% of female victims have never reported these crimes to police or state authorities. 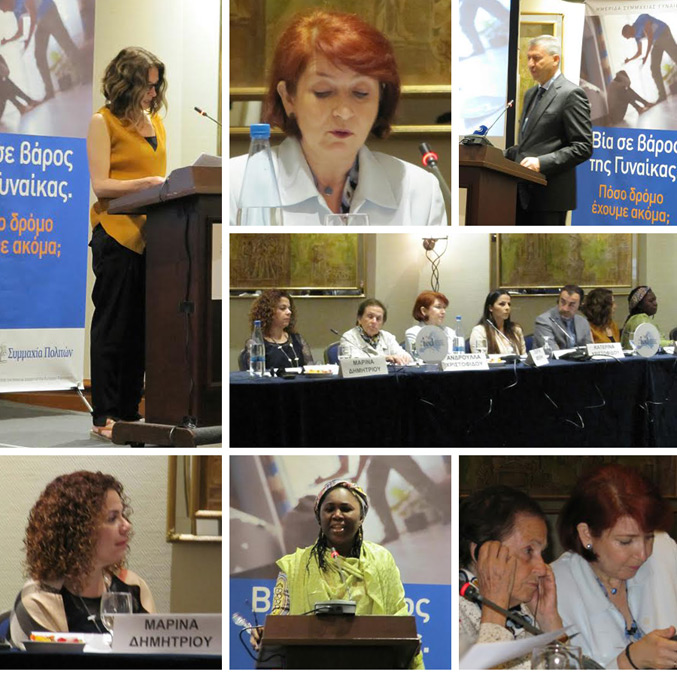 There is the most urgent need to advocate for ending violence against women and increase awareness of the causes and consequences of this violence. The society also needs to promote the need for changing norms and behaviour of men and boys and promote gender equality and women's rights more strongly. Governments and NGOs need to work together to develop national and regional action plans to prevent and address violence against women so it can be combated more effectively.

The conference welcomed several significant public figures who dedicated their lives to the fight against violence on women. This included Maria EPAMINONDA, the President of Cyprus Women Lobby that works towards gender equality and promotion of women's human rights and the Executive Director of the Cyprus Family Planning Association (CFPA), the leading non-governmental organization in Cyprus that is focused on sexual reproductive health and rights; Georgia BOURI, the Head of the Department of Equality and Discrimination in the Municipality of Athens responsible for the refugees and family violence victims in Athens; Androula CHRISTOFIDOU HENRIQUES, the Honorary President and Founder of the anti-human trafficking network ʻCyprus STOP Traffickingʼ, and Luca ATTANASIO, an Italian journalist and author who deals with the issue of violence against forced migrant women. The Institute of European Democrats was particularly honoured to welcome Hauwa IBRAHIM, a Nigerian human rights lawyer, one of the top defenders of women's rights in Nigeria and the winner of the European Parliament's Sakharov Prize for the Freedom of Thought in 2005 which honours individuals for their efforts on behalf of human rights and freedoms. She was especially cited for her pro bono work defending people condemned under the Islamic Sharia laws that are in force in the northern Nigerian provinces. In May 2014, President Good-luck Jonathan of Nigeria appointed her a member of the fact-finding commission regarding the 219 girls kidnapped by Boko Haram from Chibok.

The conference was organized with the financial support of the European Parliament.

Hauwa Ibrahim is delivering an interview for the TV Show "Με αγάπη Χριστιάνα" of the Alpha TV Cyprus.

Pdf Poster of the Event