The Rise of Nationalisms in Europe

The Institute of European Democrats in collaboration with Fundacja Samorządność i Demokracja organized the international conference titled "THE RISE OF NATIONALISM IN EUROPE: CAUSES AND CONCERNS" on 28 October 2016 (Friday) in Łowicka Cultural Centre in Warsaw, Poland.

Polish politicians, political activists and the experts on nationalism from Poland, Ukraine and Russia discussed the most serious aspects of the current nationalist and right-wing politics in Europe. The conference was opened by the Coordinator of the IED Flaminia Baffigo who highlighted the interest of IED to continue contributing to a better understanding of the dangers of extreme nationalism and political populism. The Project Manager of the IED Adriana Ciefova further explained the historical implications of nationalism and the reasons why the European right-wing and national populist parties – which have managed to establish themselves as the relevant political players in almost every European country – directly endanger the European Union and the future of our continent. The President of Stronnictwo Demokratyczne Pawel Piskorski opened the first panel titled "Revival of nationalist vision of history in Poland" by the explanation that nationalism always occurs when the society is lacking something, whether it is money, security or social reassurance. He also reminded that nationalism led to the rise of fascism and nazism in the first half of the 20.century and nowadays Europeans seems to be forgetting on this crucial legacy. Jacek Rakowiecki, Journalist of Gazeta Wyborcza, followed up by the explanation of how the Polish governmental party Law and Justice (PiS) abuses the Polish history for its political aims. He pinpointed that history in the hands of nationalists is not history any longer because it is not allowed to present different interpretations. The great problem also lies in the education because young people often do not know the basics of the European modern history. "Nationalism is not a pill which will cure the illness of Europe but rather opposite," he highlighted. The Member of the Polish Parliament Michal Kaminski talked about the economic and religious aspects of nationalism and how economic issues and catholicism can be abused for strengthening nationalist sentiments as it has been the case in Poland.

The aspects of the right-wing politics in the EU in the light of East-West relationships, with the special focus on the relationship among the EU, Russia and Ukraine, were explained and debated at the second panel titled "Right-wing politics in the EU in the light of the East-West relationships". The Leader of "Society for Free Russia" Masza Makarowa explained the main features and tools for the development of Russian nationalism and expansionism and criticized the lack of awareness and information about the EU inside Russia. Natalia Panczenko from Euromaidan Warszawa warned that the current wave of nationalism is a new phenomenon which is not based on anything real but aggression and hatred. She believes that dialogue and conversation represent the ways how to prove the danger of nationalism to all people. Roman Korbut from Euromaidan Warszawa talked about the differences between Polish nationalism and Ukrainian patriotism vis-à-vis Russians and about the importance of education in the fight against extreme nationalism.

The final panel "Where do the fears come from – Russia, Turkey, Middle East?" was dedicated to the discussion on the current complicated political situation in Turkey and Middle East and its impact on the rise of nationalism in Europe. The Vice-president of Stronnictwo Demokratyczne and PDE-EDP Andrzej Potocki highlighted that currently we have access to too much information but many people do not critically assess and filter the information they read on the internet. Journalist and former member of Polish Solidarity Kazimierz Woycicki talked about the abuse of internet by professional trolls who use internet for the propagandistic purposes and mobilisation of continually higher number of people. He further explained how internet propaganda and trolling work and how few clicks can redirect us to the trolls websites and absurd information – when more and more people click on it, absurdity becomes more relevant and that is extremely dangerous. The Reporter for Radio RMF Thomas Orchowski discussed the current political situation in Turkey and the complicated relations of Turkish President Erdogan with the EU. The Professor from the University of Warsaw Artur Wroblewski touched the problematic situation in the Middle East and the controversial attitude of Erdoganʼs government to Kurdish minority. He believes that without the settlement of the dispute between Turks and Kurds there cannot be real stability and peace in the Middle East region.

The conference brought very challenging insights on why the nationalist politicians are on their rise in virtually every European country and what steps the politicians, political activists, NGOs and public should take in order to tackle and defeat extreme nationalism. The right-wing and national populist parties currently present one of the main challenges to the European Union, its values and the future of its integration and it is our obligation to respond to them effectively and decisively, promoting and defending the values of democracy, solidarity, freedom and liberal rights which Europe stands on and which are the highest principles of the European civilization. 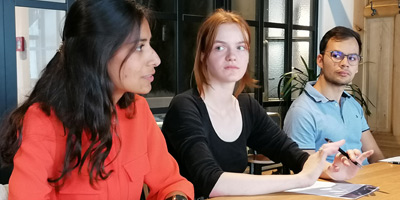