Endocrine Disruptors: a Challenge for Europe 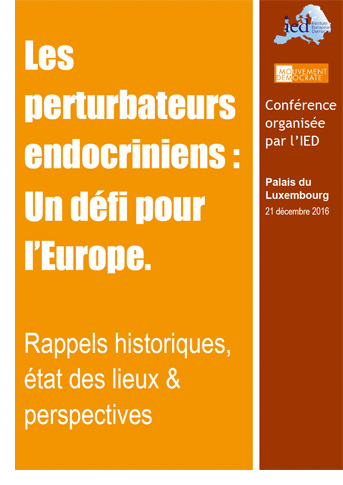 On Wednesday 21 December 2016 in Palais du Luxembourg in Paris, France, the IED in collaboration with the Mouvement Démocrate (France) organized the seminar titled "Endocrine Disruptors: a Challenge for Europe". The scientific seminar was dedicated to the subject of endocrine disruptors, which are chemicals that, at certain doses, may interfere with endocrine or hormone systems and may cause cancerous tumours, birth defects, and other developmental disorders. Today, the science explains that multiple chemical substances have the capacity of hacking our hormonal system, even at very low doses. If this phenomenon affects particularly sensitive organisms such as the young child or the foetus, then serious pathologies can develop later in their lives. The international scientific society "The Endocrine Society" figures the costs of these pathologies linked to endocrine disrupters at more than 150 billion a year for the European Union. We are therefore faced with a major health and economic threat, in which the role of European leaders is to react with determination. The seminar welcomed three significant specialists in the field – Leila Aïchi, the Member of the French Senate and Vice President of the Committee on Foreign affairs, Defence and Armed Forces, Olivier Kah, the Professor at the National Ocean University of Taiwan, Neurobiologist and Emeritus Research Director at CNRS and François Veillerette, the Director of the Association Generations Futures and President of the European Network of NGOs "Pesticide Action Network Europe". They all explained the complexities and challenges of the issue of endocrine disruptors and the legislative issues that are currently being debated on this subject in the European Institutions.